Greetings everyone and welcome to the site. If you’re here, then hopefully you’ve stumbled upon this place out of curiosity. We’re going to go ahead and jump right in.

So what exactly is cosplay?

In a previous article, I gave a very brief definition of what cosplay was to me. Cosplay stands for costume play. Costume play is, generally stating, dressing up as a fictional character who you favor whether it’s from a video game, a Japanese anime, a Japanese manga, a television series, a book and so on. It can literally be any sort of fictional character or even a celebrity. Heck, you could even make up your own character and dress up as that if you really wanted to, and no one would judge because costume play is meant to be something you enjoy.

So where did the term cosplay come from, and how did it even develop? Well, as stated before cosplay means costume play, and it is believed to have started in America in the 1930s. Costuming developed from parties held during this time that had genres to them. At the time, people only had to dress up as the specified genre.

This became more popular and small conventions began to pop up. These gatherings ended up turning more into masquerades and costume parties where prizes were also awarded to those who had the best costume.

A little later and over in Japan, college students began dressing up as their favorite manga characters when going to conventions. To further show their appreciation and devotion to their favorite characters though, they went a step further and acted out specific scenes and the personalities of their cherished characters.

Finally, in 1984, a Japanese reporter who went by Nobuyuki Takahashi coined the term cosplay. While at a convention in America, he was fascinated by the many costumes and wrote a report on it. However, he didn’t know how to describe it in Japan as he thought the term masquerade was too old-fashioned. Because of this, he combined the words costume play, and thus the term cosplay was coined.

For those still completely fresh in the water with this, Hatsune Miku is a character for a program with completely synthesized vocals. These characters are known as Vocaloids, and that’s an entire post all on its own. However, just know that it’s an instrument for making music, and there are characters/mascots for it. Hatsune Miku is one of the most popular of the many characters.

Now, cosplay is something more and more people are getting into. It’s a thing of creativity and expression. Anyone can do it no matter the age or the limitation. More often than not, people even put a spin on the characters they cosplay, changing their genders or even combining two costumes into one.

As it grows with popularity, numerous conventions are sprouting. One of the largest conventions in the United States is the San Diego Comic Con. This convention brings people from all over for one weekend of fun in the state of California. It’s not just the “ordinary” folks showing up either. Celebrities even show up to this convention whether it’s for a panel or to just enjoy the people dressed up in their costumes. I myself am hoping to plan a trip to San Diego Comic Con one day as it is huge. There’s so much to do and so much fun to be had.

One more thing about cosplay, it is an experience where you can have your pictures taken by numerous photographers and guests. San Diego Comic Con is a photographer’s dream. There’s so many people wanting to have their photos taken and photo shoots done. Cosplay is not only fun, but it provides exposure for photographers and cosplayers alike as these can also be professions. You can find numerous San Diego Comic Con photos with just a simple search.

Regardless, cosplay is definitely a growing fascination all over that’s here to stay for a while. 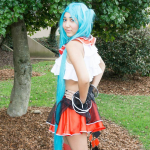